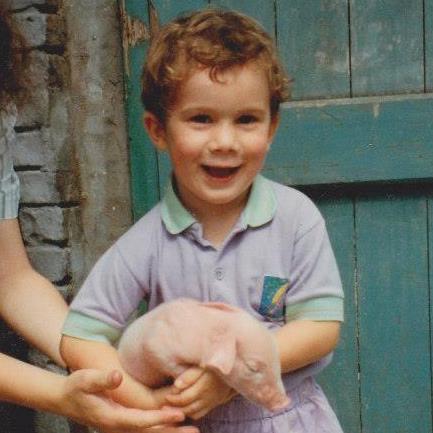 Can you tell us your story?

Originally from Brussels, I settled in Lausanne after a sabbatical in South-East Asia & Europe. I have worked in catering since I was 17, having always been attracted to this environment. I started evening classes to study economics and then marketing, but never went through, as I never enjoyed the basic school system.
When I arrived in Lausanne, I started looking for work as a cook. But knowing nobody in the business, I decided to start with temporary work. I realized that there was a huge lack of tech in this sector and I started to research how to develop a tool without any coding knowledge. I benchmarked the existing online tools and came to the conclusion that I had to do it by myself.
In addition, I had reached a turning point in my cooking career where the choice to continue on this path had become a constraint more than a pleasure. And then I discovered Le Wagon.

How was the training for you?

It was a revelation! From the first day, I enjoyed discovering this special universe and each day only reinforced my interest. The training itself went super well, top teachers who master their subject and know how to transmit it. A great group atmosphere, very motivating.

I cannot say it was easy every day, on the contrary… We receive a lot of new information, our brain takes a big hit! We come home at night exhausted, but delighted to have these new skills that we sharpen a little more each day.
Also, the material provided is extremely well done, we advance step by step and it is immediately concrete. We see our progress day by day. If I had to redo it ? I would sign right now!

Why become a web dev? Any particular project in mind?

I chose this path because to be able to develop a personal project by myself. Over the course of the training, it became a passion. I got there because I was looking to develop a tool for the temporary work sector. I realized that there was a tech lag in temporary work. Even if things seem to be moving, there are still a lot of tools to develop...

What are you doing now?

I am currently working in a startup called TAYO as a developer. We make software for the management and real estate sector in PHP on the Laravel framework and in Vue JS. These are new languages ​​for me that you don't learn at Le Wagon, but what matters to them is that I have a dev spirit and that the logic is there. The rest will come with practice. From the start they put me at ease and after a week there, I was already developing my first feature!

It was during a Le Wagon event that you met Tayo. Can you tell us what happened?

Indeed, it was during a conference organized at Le Wagon that I met Etienne Friedli, the CEO and co-founder of TAYO. He came to pitch his startup. At that time we were halfway through the bootcamp. Two weeks after the event, Thibault told us that Etienne was looking to recruit a junior developer. So we organized a first interview which went well. We planned a second one with the other co-founder Claude Frei the week after. Then I got a technical test. The goal was not to see if I was able to code in their languages ​​but rather to see if I was able to acquire new concepts by myself.
The problem was that Tayo wanted me to pass the test during our last week of training in the middle of our final project at Le Wagon. So I asked to be able to do it the following Monday. After a fairly intense weekend, I completed my technical test. Four days after the end of the training I signed my contract. I had hoped for it, but never believed it was possible!

What do you expect now?

For now, I'm going to focus on my new job and take the time to keep learning. The project they are proposing appeals a lot to me and I can see myself staying there for a while! Besides, I hope to be able to continue on our final project at Le Wagon, Ginger.
Sign up to our newsletter