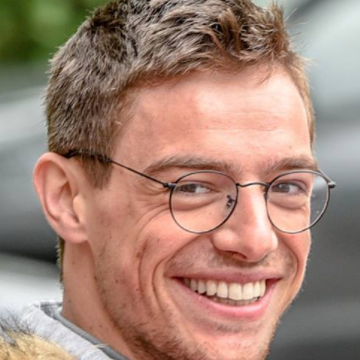 Maxime Roberti
Share the article
Meet Maxime, a Commercial Engineer graduate from UCLouvain.
As he always had been interested by the idea of becoming an entrepreneur, he followed a master dedicated to entrepreneurship, getting the chance to virtually creating a company and work within a team of people from different fields of study.
Just like he later had the opportunity to work on a project during the last weeks of coding bootcamp, working with people with different backgrounds and experiences!

But after graduating, he put aside his entrepreneurial goal to start a career as a consultant. He felt like he was missing tech skills, even just to automatize some time-consuming tasks, and decided to join a coding bootcamp to learn how to code.
And that also seemed like the perfect opportunity to learn skills that could be useful when launching a startup. Yes, that entrepreneurial mindset never left him!

What did Le Wagon bring you?

After 9 weeks of training, I was able to code web apps on my own and had the opportunity to work on several projects throughout the bootcamp.
The bootcamp was also a really good networking opportunity, not just with the other people in the class but with the alumni, event guests, and teachers. And it allowed me to develop a platform with one of my teammates to put into practice everything they have learned during these 9 weeks.
We even came back to the campus during the next session to benefit from teachers’ support and keep on reviewing the bootcamp’s content! The goal of this platform was to ease the insurances’ claims processes and was the perfect way to deepen their knowledge. But this project wasn't meant to become an actual business, so after putting creating the platform and testing it, we decided to move towards new adventures.

What came next for you?

I then co-created a platform to give industrial waste a second life, called Enso. We received support from Yncubator, Louvain-la-Neuve Young Entrepreneurs Lab, growing to a 5 people team.
The company specializes in the recovery of non-hazardous industrial waste and byproducts by making links between the supply of companies’ materials and other companies’ needs for those materials.
I acted as the CTO of the company, putting my skills at the service of the company's technological development.
But covid put a stop to the activity, with a lack of long-term visibility on what the market will look like, so I decided to take a step back and quit the entrepreneurial adventure to join a private bank as Project Manager.
I still get to put his coding skills to good use, especially my SQL knowledge to work with data.
It's particularly useful for me as I'm in frequent contact with developers within the company, so it is easier for me to communicate with them.

Any advice for anyone wondering whether they should learn to code?

Learning to code is like learning a new language. A language that is becoming more and more important to know and that companies are looking for
It increases your job opportunities, facilitates communication with tech teams, allows you to be more flexible.
It is a door-opening skill, and you’ll just love being able to develop your own web apps, even just for fun, and to have the right skills to start a career in the tech world.
And for any entrepreneur, or anyone wanting to become one, coding skills are a major asset to have. Indeed, as an entrepreneur, you’ll often communicate with developers, and having coding skills makes it a lot easier, as you’ll be aware of what you can ask for, how long it should take to build, and the difficulty level.
So my one piece of advice: start learning, it's always a good skill to add to your skillset!
Sign up to our newsletter